Bosnia and Herzegovina took me by surprise (in a good way). After somewhat traumatic coach journey (see my travel mistakes blog to learn why) over the Croatian border, twice, I didn’t really know what to expect.

If Mostar was anything like the journey, it wasn’t going to be what I’d hoped. Thankfully I was wrong and I couldn’t recommend Mostar highly enough. 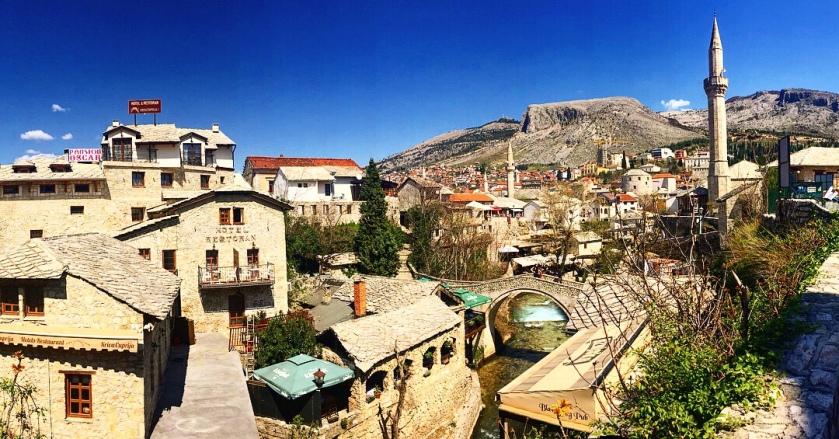 Hoping off of the coach at Mostar’s main bus terminal, in the dark, was disappointing. The bus station itself was somewhat dilapidated with a group of children begging by the side of the road. I had forgotten whether or not I had arranged for the hostel to pick up and so we decided to make our own way there on foot. At first I regretted not waiting a little longer to see if our host would arrive, but there was no time for that. Tired, grumpy and laden with hand luggage we trundled down a main road.

Where we had come from in Dubrovnik had set an expectation that asking for directions would be greeted with a grunt or a shrug. We therefore resisted asking for help. Eventually after 20 minutes or so of being lost I approached a woman in a small shop.

“Excuse me we are lost” I said pointing to the hostel location on the map.

The woman had us packed up in a taxi within minutes after having enlisted the help of another passer by. Her helpful reaction was just a taste of the kind nature we could continue to expect Bosnian people.

Our arrival at Bosnian Lovely Home was comical. Why I hear you ask? Because we’d gone to the wrong place. We weren’t even at Bosnian Lovely Home! Even after being put in a taxi we had still managed to mess it up. Instead, we had ended up in a hostel (of equal prettiness I might add) that was managed by the same person- but not the one we had booked. Not having realised our mistake we knocked on the door. A quirky young woman let us in the door.

“Hello! Nice to meet you. I don’t know where he is. I’m sure he’ll be back soon so sit down, take your shoes off. Here, look I have lots of coffee would you like some? I have lots, it’s all Nescafe, have what you like. It’s so nice to be here isn’t it! I’m used to working in Iran with things being very different as an aid worker. It’s nice to have freedom back for a while”

She was lovely. Intense, but lovely.

Within 10 minutes of meeting this energetic young woman (who we thought was the owner for a good 3 minutes) we knew her job role, reason for travel, coffee of choice and, we were now sat, baffled, with a cup of caramel coffee in hand. As we drank our coffee a key turned in the door and in jumped an equally energetic man.

“Hello nice to meet you! I came to meet you at the station but you weren’t there, and then I got a text saying that you were here and I was very confused. Ah! But you have come to the wrong place, I will take you there now.”

Before we could get a word in we were swept up off the sofa. We put our shoes back on, took a selfie with our new high energy friend and were then escorted through the town to our correct accommodation.

Side Note: If anyone sees a woman post a photo online with me and my mum looking super confused on a random doorstep please do send it to me! 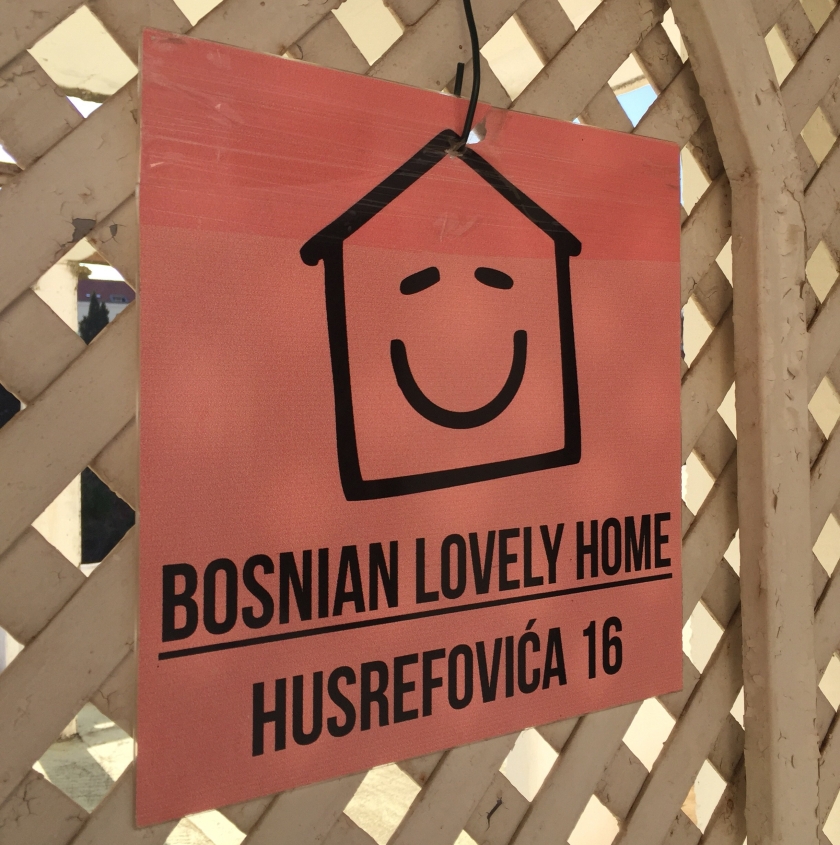 Our host, Arman, was keen to tell us all about the town. With only a few days here he wanted us to get the most out of it. He provided us with a map, his young son even tried to find us an English tour book and I shook his hand in thanks. He is adorable.

The room was homely in comparison to some of the hostels I’ve been in. The bathroom was clean, there were net curtains, a wardrobe, and a bloody veranda! Most importantly there was a stunning view. The river ran by the window and the mountain echoed the church bells and the morning call to prayer.

Arman gave us a tour of the common area, our room and the outside space before sitting us down to exchange numbers (probably in case we got lost again) because he’s just that nice of a guy.

He told us that the grave shapes in the walls by the entry door symbolised the fact that everyone ends up in the same place when they die, and that’s you are born with nothing and so you die with nothing. The moral of the story being- be humble. 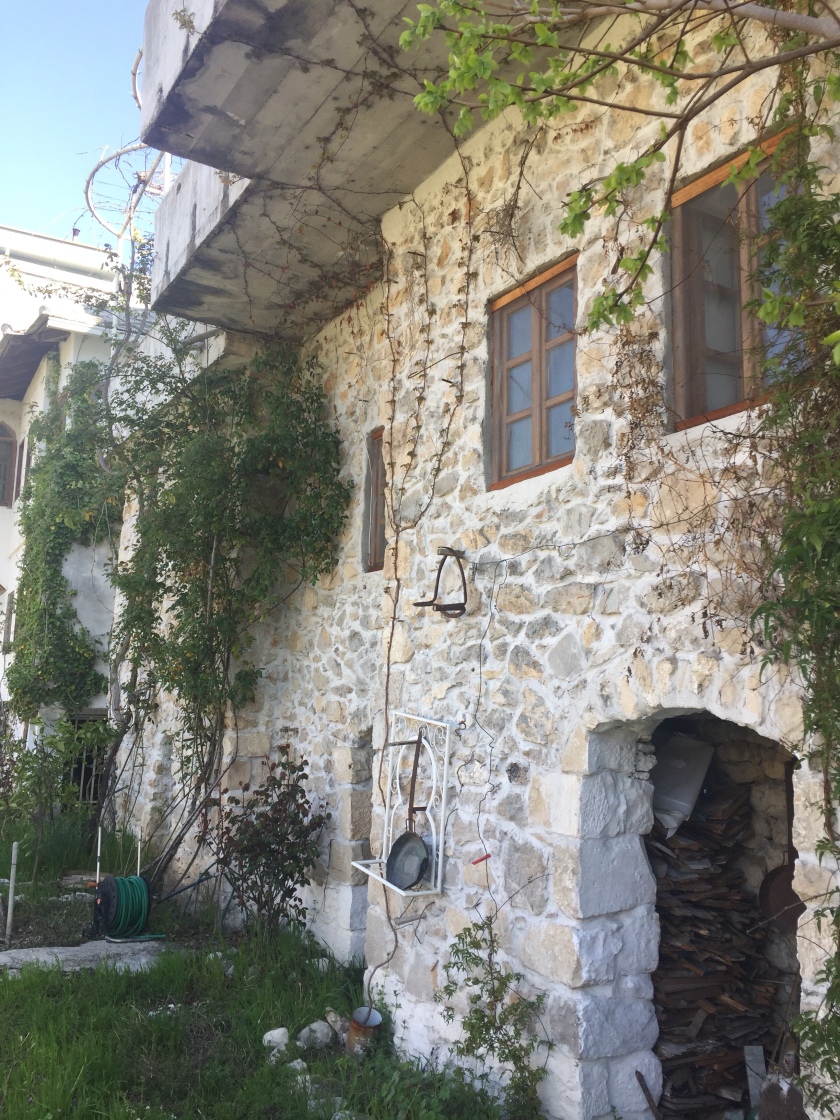 I can’t recommend this beautiful little place enough. If you would like to be fully emerged in the culture of Mostar then Lovely Bosnian Home is the place to be.

Mostar in and around the town

We were woken in the morning to the sound of rushing water running down the crystal blue river and the call to prayer. Jumping out of bed we admired the view, got dressed and, headed into town.

What to have for breakfast? In Mostar, hunger is not an issue. Bakery after bakery, cafe after cafe, we were spoilt for choice. We grabbed a traditional Bosnian breakfast to go and walked down the Main Street.

This street is always buzzing with life. Inklings of the countries turbulence history is always evident behind the new fashion clothing stores. We were astounded by the building behind the bar just 30 seconds from our accommodation. Egyptian hieroglyphs? Bullet holes? Bomb damage? We processed the damage and walked on.

After 10 minutes of walking in a straight line we found that the floor had changed from the pristine cream buffed tiles, to old bumpy cobbles. It was like we were the ‘Google Maps Man’ – you know the one that you pick up and place in a random location to look around?

The entire place had changed. We had gone back a hundred years. Market stalls selling carpets, ice cream, jewellery, scarfs, food; you name it, it was sold here in traditional lodgings. The people in the stalls weren’t pushy which was refreshing. If you said no to their offers they would smile and thank you anyway and you could continue browsing in without any pressure..

After perusing the beautiful items in the colourful market I wondered what else this is lovely street could possibly have to offer. There it was. Mostar Bridge (Stari Most).

The old bridge is of great symbolic importance. Before you head to Mostar do your research and learn about it’s significance. Walking up to the bridge we found ourselves staring down at the water.

Interrupting the serenity of the moment a man in undersized-over-colourful speedos jumped up onto the bars that lined the bridge.

“Cool he’s going to do the traditional jump” remarked another.

We stuck around for half an hour… he didn’t jump. Instead he provided us with a somewhat disturbing display of stretches as though he was preparing to jump. We later found out that it was a ploy to lure excited tourists into the museum. Fair Play.

Finding a good spot for lunch is easy. On either side of the bridge is a collection of yummy restaurants with spectacular views of the river, the mountains, the old town and of course, the bridge. For a cheaper meal walk around the back of these restaurants. You will find that the prices are significantly lower because you’re not getting the view included in your meal price. We opted for this cheaper option ending up in a lovely cafe, I believe it’s name was ‘To the Moon and Back’. The portions were huge and well worth missing out n a good view for half an hour.

After lunch we decided to get a closer look at the bridge. Heading down to the bottom of the bridge is a steep path, but the ability to dunk your feet in the cool water is well worth tackling the slope.

As you may know I am always keen to enter into a church or two. The diversity in architecture and design always intrigues me. Bosnia was time for a change. With the many mosques around the town I decided that it was time to explore one.

If you’re not too keen on entering into churches or mosques but you still want that cultural experience then you’re in luck. Walking around the streets of Mostar and admiring the external architecture of these local places of worship is just as satisfying as entering the building.

Good, drink accommodation and anything else you can think of spending your money on is relatively cheap here. With our accommodation already booked through Hostelworld we budgeted for around £50 a day for everything we would need. This was plenty and even allowed excess for souvenirs and presents.

A good way to check that you’re not being ripped off in Mostar is to head to the restaurant or shop with the best view or closest to the bridge and, check out the menu or price tags. Make a mental note of the prices… Now find a shop / restaurant that is selling a similar product without the proximity to the bridge or the views.The result? Money saved. It sounds simple but you’d be amazed at how many people get suckered into buying the most expensive items because they’re on the Main Street or by the main attractions.

As one of my top rated backpacking trips in Europe so far, I thought it important not to write an itinerary that encapsulates all of the beauty within Mostar. Why? Because Mostar is best explored without restriction.

An #Easter well spent discovering this #beautiful space we didn’t know existed right on our doorstep!
Pretty and #pink 🌸
The local adventures continue 🌲
So the travel plans didn’t quite materialise this year... something to do with a global pandemic 🤷🏽‍♀️but we had a lovely time in #Milan in February just 1 day before the shit hit the fan so here are some snaps from the beautiful #Italian #city .
When your love of #travel 🧳 meets your love of #music 🎵 you end up with a #musicvideo like this! Follow @j_el_r for more #songs and watch the full #wanderlust worthy music video over on #YouTube 😁
Inside the palace.
Lovely day with @char.fraser being nerdy.
Outside the #castle .
Inside the #castle
Picnics and Politics.
Day Trip to Denham Country Park.
Local adventures.
Today was necessary:
#blackouttuesday
#nofilter needed. #Glass ceilings above the #designer stores.
Today I made a 3d #travel frame from my time in #Tanzania all those years ago.
Today’s walk was interrupted by a group of horses. Not the worst walk we’ve ever been on ❤️ Alfie kindly posed with them as though it were an album cover 😄
THREE years ago I was in #Poland with this feisty stone #dragon !